The State of the Courts: Chief Judge Ronald Ficarrotta 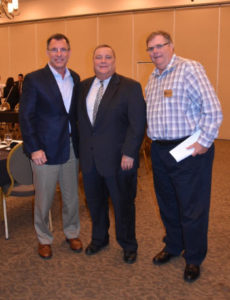 The Honorable Judge Ronald Ficarrotta of the Thirteenth Judicial Circuit Court spoke on the state of the courts during our September luncheon. This includes what the court system in Florida is comprised of, what is happening and what is to come. Here is a brief overview of Judge Ficarrotta’s presentation.

In the Thirteenth Judicial Circuit there are 62 total judges, 45 circuit and 17 county that govern the Hillsborough County population of 1.316 million. There were 236,536 circuit/court annual filings in the 2013-2014 year, with county civil filings taking up the majority. Misdemeanor criminal was next highest, followed by united family, circuit civil, felony criminal, and probate. In general, the number of case filings is down in all categories except probate. Out of the state of Florida’s annual budget of a little over $78 billion the judicial branch only receives about .7% of that (~ $548 million).

So what does the Thirteenth Judicial Circuit court want? Well in general they want things to be easier to handle by implementing better programs. These programs will happen with a larger budget. This money would go towards a criminal courthouse facilities study and renovation or move eventually, an enhanced Veteran’s Treatment court and an increase in information sharing for Mental Health Services to help develop a Mental Health Court. Judge Ficarrotta also expressed the need to ask (again) for a larger budget to increase the below-average salaries of all judicial employees and raises for Judges who haven’t received raises in about 11 years. Judge Ficarrotta also said that they want the Second District Court of Appeals, to move from the dilapidated location in Lakeland, to Tampa.

Right now the Florida legislature is pushing for judicial term limits. Judge Ficarrotta is not a proponent of judicial limits because of the negative impact on the legal careers of judges once their term expires. Overall Judge Ficarrotta believes the Thirteenth Judicial Circuit court is in great shape. With many new judges coming in, there will be new and fresh perspectives in the courts.

Judge Ficarrotta ended his presentation with this poignant statement about being a good, fair judge, “You just have to bring compassion to the court rooms.”